The timeline of Frozen universe

What would be the exact year the events in the Frozen universe took place? Many theories exist on this subject, but the previously-accepted theory based on the year data written on the map in Frozen: Fever film seems not to work anymore. Let’s identify what makes previous theories incompatible with new evidence and try to develop a new theory that can explain the accurate timeline of Frozen events.

First of all, let’s clarify some known canons. The above figure shows the exact timeline of the events in the Frozen films. The relative year difference between events is quite well known. Thus, if we can pinpoint the specific year for some events, we can draw the whole timeline table for all events.

The figure shows two maps appearing in Frozen 2 (left) and Frozen: Fever (right). We see that MDCCCXL is written on the top-left side of both maps, and this represents 1840 in Roman numerals. This would mean the date of production of the map or something related to that year.

This was the previous theory and now induces conflict in the map of Frozen 2. The map found in the wrecked ship in Frozen 2 also has the number 1840 on itself.

But if Iduna and Agnarr died in 1836, as discussed in the previous theory, how could they have the map with 1840 inscribed on it? This is the conflict arising when we compare these two maps.

We can apply two different approaches to resolve this issue.

In my opinion, the first approach is not acceptable due to the aforementioned reasons.

In the film, Iduna and Agnarr are headed to the Dark sea to reveal the origin of Elsa’s magic. But as we can infer from its name, the Dark sea is a dangerous and not a human-friendly place. If they were to make the journey to that place, they would have taken the latest map at that time. Thus, it seems more reasonable to assume that the number 1840 means the published year of the latest map.

This means that Iduna died in 1841, which implies that they took the latest map published in 1840 along their journey. This seems reasonable behavior considering the danger of their journey. Thus, if we accept this idea, the correct timeline of the Frozen universe would be as follows.

What makes this new theory of 1844 more reasonable is the publication date of the fairy tale “Snow Queen” by which Frozen was inspired.

So, the year 1844 becomes meaningful when we consider the relationship between the original novel and the film.

We can think of another theory (which I will call as LMT, Little Mermaid Theory) based on some scene in the movie.

Above is the scene where Agnarr is reading the Little Mermaid. Its publication date is 1837. Agnarr was 14 years old when he escaped from the enchanted forest. He and Iduna look almost the same as seen in the enchanted forest. So, we can regard 1837 as the year when the Northuldra-Arendelle war happened. Then the whole timeline would be as follow:

This could be possible, but I don’t support this theory. Here are the reasons.

When Halima shows the black-and-white photo to Mattias, Mattias says:

“What is this crazy magic called again?”

That is, Matias is not aware of the thing so-called photo. But take a look at the History of photography.

If we accept the little mermaid theory (LMT), Mattias entered the enchanted forest in 1837. He would have heard something about photography technology. But in the movie, it seems that there never existed anything about the photography technology before Mattias entered the enchanted forest. So these two facts seem not compatible.

Next, we take a look at the ships in Frozen movie. As you can see, the steamboats do not appear in the Frozen movie. It also seems that these steamboats are widely used for trade during the 1870s ~ 1910s Ref Thus, if Frozen 1 took place in 1868 (based on LMT), we should see some sort of steamboats in the movie. Since we can’t observe any of them, the era of Frozen is much earlier than the 1870s.

From these observations, the little mermaid theory seems unacceptable, and we should regard it as just an Easter egg from Disney animations.

Now, let’s consider the validity of the original theory based on the Fever map data.

As you can see, we see Anna and Elsa riding bicycles. But the bicycle pedal was first invented in 1869. So, this feature makes an intrinsic contradiction which says that Frozen: Fever took place in 1840. Also, if we take a close look at the map between Frozen: Fever and Frozen 2, the terrain does not match. I think the theory based on Frozen: Fever is not convincing that much.

So, it seems that 1844 is the most probable year when Frozen 1 took place.

Suppose we accept this new theory and assume that Frozen 1 took place in July 1844. In that case, we can fix the coronation date exactly. In “Love is an open door song”, we see the full moon phase in the evening on the coronation day as in the above figure.

The moon phase data in 1844 says that the full moon arose in Jul. 29. So we can say the coronation day is July 29. Of course, it could be July 28 or 30 since a 1-day difference does not make a noticeable difference in moon shape, but let’s simply stick it to July. 29.

Summing up the arguments, the timeline of the Frozen universe is as follows: 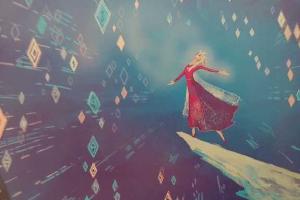 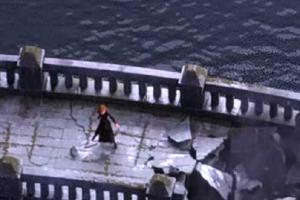 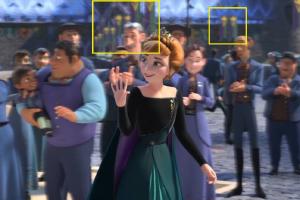