Warning! This article includes spoilers and the contents of the book!

A few days ago (Jul-19, 2022), a new Frozen novel titled ‘Frozen Polar Nights: Cast into Darkness’ was released. The term Polar Nights in the title means a phenomenon where nighttime lasts very long in December that occurs in the northernmost or southernmost regions of the earth. In Frozen, Arendelle is located near the northern hemisphere, which is also affected by this phenomenon. Anna and Arendellians hold a Polar Nights festival to celebrate this season. This book covers a series of events that take place during this time.

The total volume is about 300 pages, and the English is not that difficult, so I think any non-English speakers with intermediate English levels can easily read this.

Score : ★ ☆ ☆ ☆ ☆
To me, this was quite a disappointing book. This would be the third middle-grade novel following Shadow of Forest and Dangerous secrets, but the contents felt quite awful compared to the previous two books. Any of the plots in this book, such as characters, events, or backgrounds, weren’t what I had expected in this new novel. In the following sections, I’ll explain each of them.

To begin with, let’s briefly summarize the whole storyline.

Anna, tirelessly working and preparing for the Polar Nights festival in Arendelle as a new queen, takes a tiny break and go one-night camping with Elsa, Kristoff, and Olaf in the enchanted forest. That night, Kristoff tells a story about a monster called Draugr. That was a story about two princess sisters Sissel and Inger. One day, jealous of her elder sister Sissel, Inger pushed her sister into the river and killed her. With a grudge against it, Sissel turns into a monster Draugr and is resurrected for revenge. For some reason, however, that Draugr emerged in Arendelle and brought many problems. Elsa and Anna struggle to resolve that issue, and eventually, they fix it.

After about three years had passed since the release of Frozen 2, what would be the fans’ expectations, especially for those who are still passionate even to buy this book, on this new novel?

Without any doubt, it would be the story of Anna and Elsa. The fans want to see something like how Elsa’s magic changed after she became a new spirit or how new life has begun for Anna as a new queen of Arendelle. Considering their sisterhood emphasized throughout the whole series, they want to see how Elsa and Anna could help each other even though they are now apart and what would happen to their lives. They might especially want to see what happened right after Frozen 2.

Then, does this book achieve this goal? Definitely no. It could vary from each one’s perspective, but at least to me, it seems that Elsa and Anna do almost nothing to resolve the problems in this book. Let’s talk about Elsa first.

Elsa finally embraces her magical power in Frozen 1. She grows her power and becomes a magical spirit in Frozen 2. Her identity is snow and ice, and employing this magical ability is what we expect from Elsa.

However, these abilities do almost nothing when resolving the issues in this book. In a broad sense, we can say that Elsa has two magical abilities: ice magic and seeing past memory, as shown in Frozen 2. These abilities, however, literally becomes useless in this book.

First, let’s consider her power of reading past memories through the water. The only utilization of her magical power in this book is her memory magic to see some part of (not the whole parts) what had happened to Sisssel and Inger at that river in the past. Elsa says that she might reveal the truth of the past by examining the river since the water has memory. However, this turns out to be helpless because the river source had changed. Current water flowing the river is not the same water as past, so this water does not hae past memories. She manages to see the past through Inger’s necklace, but even she fails, and Draugr just volunteerly shows that past.

Why on earth do the authors limit her ability like this? If they were to remove her ability to see the past through water, they could have achieved it by not mentioning this ability. Limiting her memory-magic by just saying, ‘The source water changed from the past! So I can’t figure out what had happened in the past with this water!’ seems a pretty awkward way of achieving that goal.

Now on Elsa’s ice magic. Throughout this book, Elsa’s ice magic turns out not to work for Draugr. It is described that Draugr has some kind of ability to absorb (?) her magic. Hence, as Elsa uses her magic, her magical power weakens.

What the… A monster much stronger than someone who had fought against the four elemental spirits and entered deep inside the Ahtohallan? The Draugr even infiltrates into Ahtohallan and disturbs Elsa see the past memories. A monster that can disturb Ahtohalln, the divine magical essence of the Frozen universe? At this point, I came close to throwing the book.

Elsa does at least something in the book compared to Anna. To be frank, Anna does nothing in this book. If we remove Anna throughout this novel, there is no problem with the progression of the events. Even without magical power, Anna tried to get her sister back home in Frozen 1 and head to earth giants to destroy the dam in Frozen 2. There’s nothing like those in this book.

I don’t understand this treatment on Anna. If the authors were to limit Elsa’s magical power, shouldn’t they give Anna some role in resolving this problem? Elsa uses her 5th spirit’s ability, then they should have provided QUEEN Anna’s role.

Instead, in Anna’s case, her complex mental situation, the concern of Arendellians, and Kristoff’s losing memory are more portrayed. If they had given Elsa the heroic role of resolving the problems, it would have been better to focus more on such emotional lines and describe her mental deeper, but nothing is done. I don’t understand why they treated Anna like this.

As eager fans of this franchise, we all know that Elsa and Anna love each other and are such special people to each other.

The problem is that this book constantly injects those facts into the readers. Throughout the book, it depicts how Elsa cares about Anna and how Anna worries about her sister. One argument is okay, but they constantly remind the readers. As fans still passionate even to buy this book and enjoy Frozen, we all know how strong their sisterhood is. If they were to emphasize their sisterhood, this seems a very ineffective way of depicting it.

In Frozen 1 and 2, we saw many situations for both sisters. Through the death of Anna in Frozen 1 and the death of Elsa in Frozen 2, we saw how strong their sisterhood was. Of course, one of the underlining themes behind the Frozen series is Elsa and Anna’s sisterhood. Still, it would be such a cliche to only focus on that when the main characters are growing up and walking their path.

So, I think most fans would wonder these things after Frozen 2.

Although these things are described slightly in the book, it is only mentioned to the degree that anybody can think of, not much on details. Something like Elsa’s birthday preparation and the secret passage of Arendelle castle is just mentioned without any details. It’s a bummer. Instead, those descriptions can be found in more detail in other Frozen storybook series.

One more problem is that too many important events occur accidentally. For instance,

If you have already read the book, you know that Draugr removed people’s memory to erase the misleading memory of Sissel and Inger. In the book, Elsa and Anna think that if they let the people know the truth about the past, Draugr might disappear. So they try to figure out what on earth happened in the past, and they reach the truth and guide the people to know the truth. The thing is, Draugr does not disappear by this behavior. That is, the behavior of Elsa and Anna letting people know the truth did not help exterminate Draugr.

Rather, the direct cause of Draugr’s disappearance was that it, or Sissel, accidentally met up with her missing sister Inger by accident. Of course, that was possible because Elsa and Anna brought Inger to the town. But to me, it just seems a lucky thing to happen.

Another thing that doesn’t make sense is the scene where Draugr comes out of the sea and invades the town. Apparently, the Draugr is described as afraid of water (Since it drowned and died). Then, how could it emerge from the sea? Why did the authors first describe Draugr as afraid of the water, then, in the late scene, it just emerges from the water, which implies that it isn’t scared of water? I’m sure the authors are unaware of what they were writing at this stage.

Another shitty point is that the authors try to match the sisterhood between Elsa and Anna to Sissel and Inger. Throughout the book, it is described that both sisters are very similar, but to me, it seems quite a stretch.

Descriptions of settings after Frozen 2 are briefly mentioned, but most are discussed superficially. Or instead, it seems that they seem to avoid mentioning it deliberately. For instance, why Anna or other characters can’t visit Ahtohalln is described in a vague sense. Considering the author’s previous work (Dangerous secrets), it seems that they are not allowed to touch such details in this novel.

Also, I can’t understand why the hell authors mention Anna and Kristoff’s 6th choco-versary. When we say some ANNIVERSARY, it usually refers to some kind of annual event. It has been only three years since Anna and Kristoff met. What the hell is the 6th year anniversary (or just the 6th (twice-a-year) anniversary)? They may have intended to reveal Anna’s love of chocolate by mentioning that kind of anniversary, but it just confuses readers.

The origin of this whole mess is the overpowered scale of Draugr. Considering Iduna’s map on a wrecked ship in Frozen and VR content Myth: Frozen Tale, it is evident that the four spirits (+ Elsa) are top-tier magical beings in the Frozen universe. But in the book, Draugr’s magical power goes far beyond these spirits’ magic. It surpasses Elsa’s magical power, has tremendous strength, causes weather change across the country, extends its power into Ahtohallan, and deals the memory-related magic, which is usually an exclusive ability of Grand Pabie. Personally, it was pretty difficult to accept such an omnipotent monster in the Frozen universe.

Frozen Polar Nights: Cast into Darkness is a new middle-grade novel that can catch the curious fans wondering about the stories of Elsa and Anna after Frozen 2. However, judging by the helplessness of the main characters, exaggerated background setting, and poor causality, I don’t think it is a well-written novel. Frankly speaking, if this book was published as a general novel, not as a Frozen franchise, would I have read this book to the end"? Definitely no. Well, just watching Elsa and Anna’s hanging out throughout the book could be fun to some readers, but as a heavy fan of this franchise, this book was quiet a disppointing one. 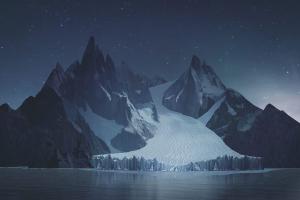 Ahtohallan: its origin and meaning
Aug-31-2022
Ahtohallan is a key concept and place to understand the magic of the Frozen universe. Why was it named like that? We investigate its etymology in this article.