Olaf’s frozen adventure (OFA) is a short film of Frozen franchises which deals with some series of events that happens on the Christmas season in Arendelle. We know that this happended near the Christmas season, but as I know of, the eact date OFA is taking place is now known.

The first candidate is the Dec 13. In OFA, we see the Arencelle village girls wearing the white dress and holding candles in the head. The motif of this scene is the Saint lucia day. It is a kind of day of commemoration of Saint lucy who lived in 4th century for her martyrdom. Also, this day is most widely celebrated in Scandinavia and Italy.

The outfit of real feast looks almost the same as the one shown in the movie.

If we adopt this idea, the date of OFA would be Dec 13.

The second possible candidate is Hanukkah, one of the Jewish festivals.

In OFA, we can see a top and candlestick with 9 candles. This candlestick is called as Menorah, and the top as Dreidel. Both stuff are used in the feast of Hanukkah, one of the Jewish festlval. The feast last for 8 days, and each candle is lit day by day.

The exact date Hanukkah takes place is calculated by the Hebrew calendar, so it is not fixed in our Gregorian calendar system, but it happens between late November and December. It takes place on Nov 28 for the case of 2021.

If we refer this scene, Hanukkah would be the date for OFA event.

The next candidate is the Dec 25, the Christams day itself.

I think this does not need further explanation since we can find a lot of Christmas stuff in the movie.

In OFA, we see lots of stuff related to Yule. The feast of Arendelle starts with Yule bell. We also see many Yule goats. Disney also presents the Arendelle Yule log movie every this season.

This feast of Yule or Yuletide was celebrated in central Europe and Scandinavia starting from winter solstice to Jan 1, lasting 12 days. And this feast underwent Christianised reformulation and resulted in current Christmastide.

So, if we take Yule as a motif of OFA, then it would be winter solstice (around Dec 21) for the OFA event.

Now, we have 4 candidates to be chosen as the date of OFA events.

It is not easy to select one specific date with confidence, but to me, it seems that the winter solstice is the most probable one that is compatible with other dates.

Here’s the reasons for it.

First, we consider Dec 13, Saint lucia day. Even though this day is Dec 13 in modern sense, it was held on winter solstice before.

But, how? How Dec 13 could be solstice? The answer lies on the difference between Julian and Gregorian calendar system.

That is, the feast of Saint lucia day was originally held on winter soltice, and we might regard this scene representing winter solstice.

The next issue is Hanukkah. As Lucia day, Hanukkah also originates from the winter solstice. I’m not aware of this issue perfectly, but the brief explanation is as follows.

Near 2th century, Seleucid Empire was occuying Jerusalem and forbade Jewish religious practices. They also had the custom of celebrating winter solstice. But after the revolt by Jewish caused from this religious persecution, they recaptured Jerusalem and transformed the custom of celerabrating winter solstice by Seleucid empire to Jewish religious feast called Hanukkah.

Thus, we can view Hanukkah as a feast originally held on winter solstice. (Please note that this is one of many claims which explains the origin of Hanukkah.)

The Christams itself originates from Yule, so Christams and winter solstice (starting day of Yule feast) are deeply related.

Thus, it seems that winter solstice is the most suitable day that can intertwine all the diffent date features seen on the movie without causing much of discrepencies. Saint lucia day was originally held on winter solstice, and Hunukkah, Christams seems to have same origin.

We can of course regard Christams as the day, but the relation between Saint lucia day and Christams seems weaker than that of Saint Lucia day and winter solstice.

Anna on that day

To resolve this issue, we need to understand the timeline of Frzoen series. Unlike the movie relase date, the timeline of the story goes from Frozen 1 to OFA to Frozen:Fever, and in Frozen Fever, Anna experiences her first birthday party after their separation.

The thig is, Anna did not have any kind of knowledge of what the birthday was. We do not know what happend to Arendelle castle during the seperation of sisters, but it seems that their parents have forbidden all kinds of feasts and parties to keep Elsa from outside. So Anna does not have any knowledge of the birthday even after grown up.

We can see how Anna thinks about birthday party from the book.

“What is birthday party” Anna asked.
“Well, it is a day when every one gets to say they really, really, love…"
“… cake?"
Anna finished.
“Yeah. You’re right.”

Tha is, Anna did not know anything about what the birthday party was. Thus, at the time of OFA, even though anna knew that it was Elsa’s birthday, she wouldn’t give a thing because she do not have any knowledge of birthday party. So, I think we can explain why Anna didn’t do anything on that day, winter solstice.

It seems that the winter solstice is the most suitable day that all the events of OFA took on place. 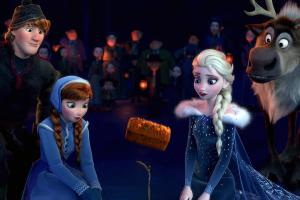 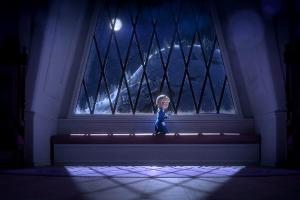 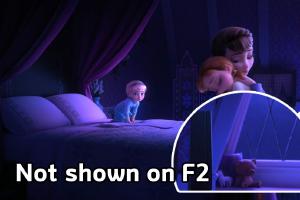 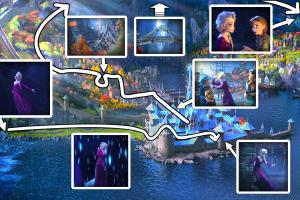